We often assume people can just come together and work as an effective, collective team. In reality, this is hardly ever the case! Understanding individual team members and their purpose or function within a team is paramount for a successful, cohesive and effective team. Our Work Roles Report does this and more! The report identifies an individual’s work style preferences based on the way they interact with others and their approach to work. These preferences are represented by 8 different Work Roles, each with their own strengths and weakness.

So, what are the work roles?

With the wildly successful HBO Series Game of Thrones now complete… our Monday’s will never be the same and we’re already in withdrawal. So, to celebrate the end of an era, we’ve analysed some of Daenerys’ squad using our Work Roles framework and identified their Primary and Secondary Work Roles and the way these unique interactions play out.

Check it out below and let us know if you agree, or what role you would give them instead! 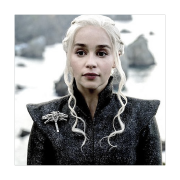 Daenerys is undoubtedly a strong leader, and as such we think she perfectly embodies the role of Assertor. Daenerys consistently asserts herself, takes charge of situations and coordinates people in her quest to the Iron Throne. Her secondary preference of Striver provides her with the drive to take the Throne as well as persist in her overall goal of freeing people from oppression, and she takes a resourceful approach (dragons) to achieve them. The interaction of Dany’s Assertor and Striver preferences has seen her achieve many firsts, such as convincing the Dothraki to cross the Narrow Sea, uniting various armies and taking control of several cities. 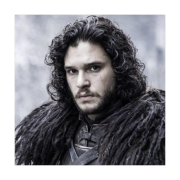 Jon’s primary preference is Striver. Jon’s ambition has always been about doing what is “right” and the “greater good”. He has strived to do all in his power in order to achieve these, even if it meant going against tradition and losing his life, such as bringing the Wildlings south, or putting his duty above his love of Dany. His secondary preference as an Assertor means that he often takes control of situations to coordinate and lead people. We have seen his ambition play out when he united the Northmen and the Wildlings to build an army to fight the Night King, and the subsequent leadership positions he has taken on to coordinate the North, such as the Lord Commander of the Nights Watch and the King in the North. 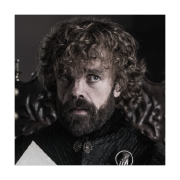 We place Tyron as primarily a Relator. On numerous occasions, Tyrion has been relied upon to act as a Relator to mediate interactions to improve team dynamics and build new relationships. He takes advantage of his secondary role as an Analyst to break down what benefits could come from establishing better social interactions between people. We‘ve seen positive examples of Tyrion relating when he actively communicated the positions of Jon and Daenerys to each other. He was able to get them to understand how they could help each other achieve their goals of saving the Seven Kingdoms and then taking the Iron Throne. 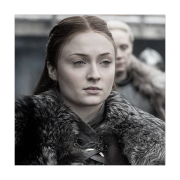 In the later seasons, Sansa’s primary preference of Analyst is in full force. She utilises her intellect and expertise to gather and evaluate relevant information in order to breakdown her adversaries’ plans. Sansa leverages her secondary preference of Finisher to focus on the finer details and ensure her plans are executed flawlessly. Sansa’s Analyst and Finisher preferences are clearly illustrated by regaining control of Winterfell, her overthrow of Littlefinger (Petyr Baelish) and his influence, and the eventual establishment of a safe haven in the North under her command. 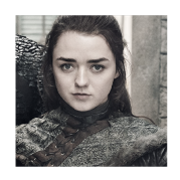 Arya is first and foremost a Finisher. She kills the Night King – Is there a better example?! Ayra is not only competitive, but she sets goals and does everything in her power to achieve them. Her secondary preference is a Striver, pushing herself hard to achieve ambitious goals that have allowed her to survive and become a force to be reckoned with. We see this in her drive to eliminate all those on her “kill list” and her ability to successfully execute this (at least those that weren’t killed by others). 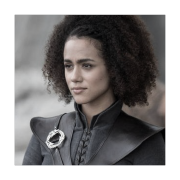 As a Supporter, Missandei has a preference of attending to others’ needs and taking a team-oriented approach. She utilises her secondary preference of Optimist to remain resilient and keep morale high during challenging times. This has played out when she was required to support Daenerys and the various challenges Dany faced when ruling Meereen. Missandei always remained optimistic even when her Queen vanished on Drogon’s back for weeks. The loss of Missandei in the final episodes saw the optimism and resilience of their squad drop dramatically. 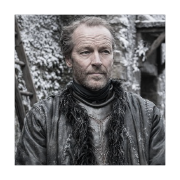 Jorah is an Optimist. He remains resilient and calm under pressure, which positively influences those around him. His second preference as a Supporter sees him put the needs of others before his own with his actions often being for the good of the team. These preferences are particularly evident when it comes to his relationship with Daenerys. He is positive and optimistic that she would be an excellent Queen despite her flaws. He leveraged his Supporter strength to ensure the team remained strong, even when it meant admitting that Tyrion was a better Hand to the Queen, despite his own desire for the position. Again the loss of his optimism and support to the team had dire consequences.

A Dragon-Eye View of the Group

There are a diverse range of Work Roles in this group. This diversity lends itself well to cohesive teamwork as each individual’s primary and secondary roles complement each other to create, overall, a well-balanced team. However, the team lacks strong innovators (see image below). This can be problematic in terms of missing a creative approach to problem-solving and developing a long-term strategy. Time and time again (in the final seasons at least), battles have played out less than favourably for them, potentially due to a lack of creativity. They also have come up against issues of power conflicts due to a lack of long-term vision beyond immediate challenges (i.e., the Night King’s Army). Other considerations are the high proportion of Striver preferences in the team, and the conflict between the two Assertors. This has caused some additional tension and conflict as each person competed with the other to push their own goals ahead. 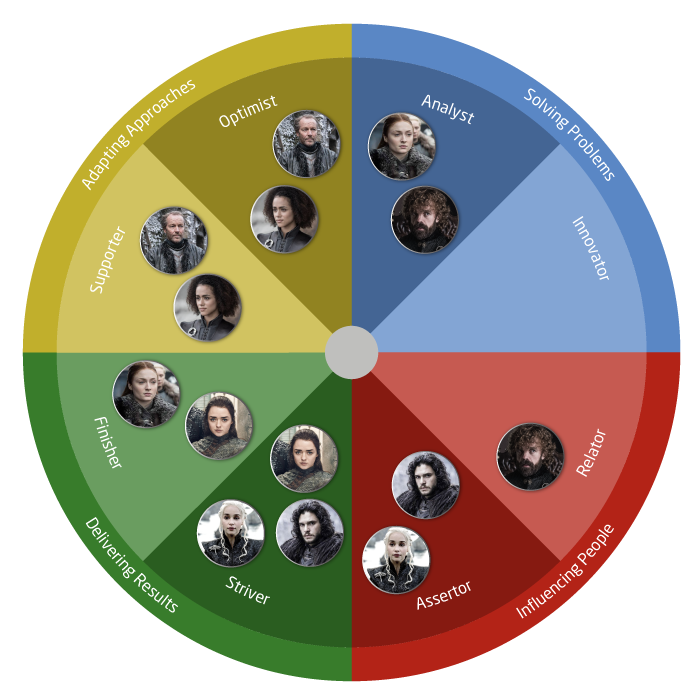 Although these characters are not always working in the same team, when they do, the dynamics become obvious. It demonstrates how having a diverse range of work roles within a team can be important to get various perspectives and avoid too much conflict or homogenous thought processes.

How would you describe individuals working in your team? Are you able to contribute diverse thoughts and opinions, or is a lack of diversity having an adverse effect on collaboration? These are just some of the considerations that should be taken into account when developing teams for projects or new hires joining the team.

Not sure where to begin?

Enter your details and we'll add you to our mailing list to receive our newsletters and product updates.